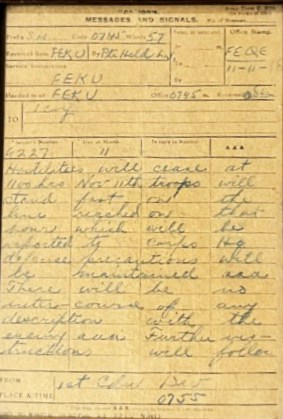 A 5 inch by 7.5 inch paper message directing the cease fire of troops. This original message is the clerk’s carbon copy, was received and was handwritten by a clerk in the Battalion Orderly area of the 15th Battalion (48th Highlanders) on standard message paper. It is framed in wood with a glass cover.

Part II Order dated 14 Feb 14 issued by Canadian Section GHQ 2nd Echelon as the “Sailing List No 50” recording the members of the 48th Highlanders, 1st Battalion who embarked on the Reina del Pacifico from Halifax and landed at Gourock, Scotland on 31 Dec 1939. The list is typed on foolscap sized paper

Pt II Order No. 183, Toronto, 23 July 1940. An extract from No 2 CITC Daily Order No 33 Striking off Strength of 48th Highlanders for purposes of proceeding overseas effective 14 July 1940 as reinforcements for the 1st Battalion, 48th Highlanders.

Part 2 Orders Disembarked in Liverpool 22 May 40

Typed foolscap pages. Part II Orders No 51, 18 Aug 41 issued by Canadian Section GHQ, 2nd Echelon listing 48th Highlanders for embarkation: SOS Canadian Army (Canada) on embarkation at Halifax on 12 May 40 and were TOS Canadian Army (Overseas) on 13 May 40 disembarked at Liverpool on 22 May 40.